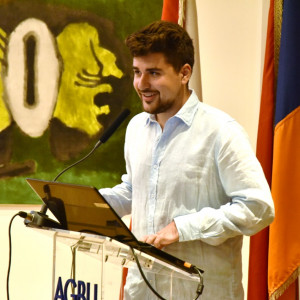 Alec Melkonian, the first speaker of #AlumniTalks, presenting his work.

AGBU Lebanon and the Antranik Youth Association (AYA) initiated the youth-centric #AlumniTalks series, a monthly live interactive interview held for the Lebanon university students and scouts’ alumni, as well as the general AGBU community of Beirut.

This in-person event hosts an alumni member to talk about his or her career success with an extensive overview of their journey, followed by a Q&A.

The first event of this series took place on June 30, 2022 in the AGBU Demirdjian Center. Entitled “Architecture for Hope,” it featured Alec Melkonian, a student of architecture at the Southern California Institute of Architecture.

Alec is a proud AGBU-AYA member, is a former scout, and currently is a mentor at the newly launched AGBU Innovation Studios in Pasadena, CA, where he teaches architecture and innovative designs to middle and high school teens.

Mr. Hagop Djeghelian, member of the AGBU-AYA Central Committee, and one of the organizers of the #AlumniTalks, gave the opening remarks. 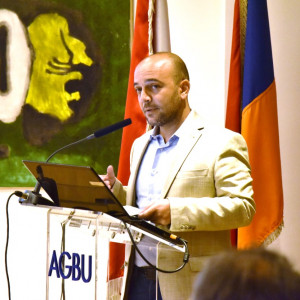 When Melkonian presented photos and videos of some of his architectural designs and projects, he gave detailed descriptions of the building processes of each. His obvious enthusiasm and passion for his work was on full display throughout the evening. 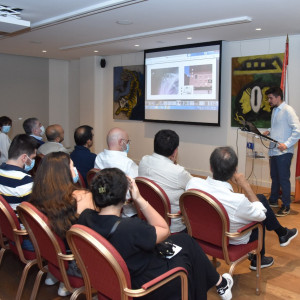 Alec Melkonian presenting in front of the audience. 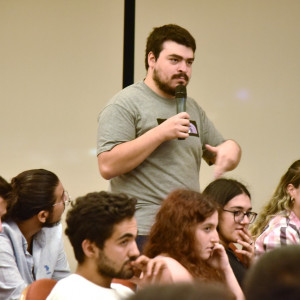 An interested audience member participating in the Q&A session.

At the reception, inspired audience members met with Melkonian, asking about his future plans, while some of his contemporaries recalled their old days together.

Next month’s featured guest is to be announced soon.